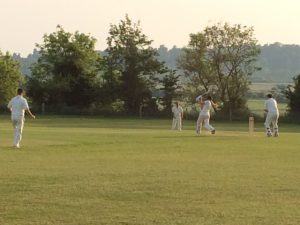 Singleton CC’s first away match of the season was hosted by Burpham CC on warm, sunny Bank Holiday Sunday. Burpham’s ground nestles high on the left bank of the River Arun, giving commanding views across the water meadows towards Arundel Castle, a lovely setting for an afternoon of competitive but friendly cricket.

Singleton’s line up was bolstered for the first time this season by the welcome inclusion of the Davies family, Martin, Jack and Freya, with support from the boundary from Mandy. Skipper Glen Stanford won the toss and elected to field, repeating what has so far been a successful formula.

Singleton’s bowling attack certainly proved making runs a challenge for the opposition’s opening batsmen for the first few overs, with R Dawtrey (3-33) and newcomer R Inger (0-35) claiming maiden’s off the first three overs. For the first 10 overs, Burpham’s scoring looked to be held in check, with opener I Mintram (68) and R Diplock (21) only adding runs at 2.7 per over. A Court (1-28) was able to remove R Diplock in the 17th over when the partnership reached 48 but the second wicket of A Budd (19) did not fall for another 42 runs to J Davies (1- 27).

Burpham’s middle order then took command, with M Barry (37) and P Horne (48) moving their score along briskly, with P Horne finding the boundary regularly off L Dawtrey’s second spell (0-62). D Price (0-25) and J Baker (0-16) off a four and two over spell respectively only marginally slowed the accumulation of runs. Singleton’s fielding was frustrated by a quick outfield and whilst catching opportunities presented themselves, only two were taken (J Abbott for P Horne at deep cover and G Stanford for C Harris behind the stumps – both off the bowling of R Dawtrey). This was compensated by sharp fielding by A Court at silly mid off, hitting the stumps to dismiss M Barry after attempting an ambitious single. A further 26 runs was added by Burpham’s no’s 6, 7 and 8 – J Oakden (12*), C Harris (8), D Tetbury (6*) – to bring their total to 226-6 off their allotted 40 overs.

After last week’s result against Liss CC, Singleton was confident that this was an achievable run-chase off this pitch. Opener J Abbott (23) began well, regularly finding the boundary, with in-form A Court (82) again showing the batting consistency of previous matches. Burpham’s opening bowlers D Tedbury (0-37) and C Harris (0-32) had little success and it was the first change pair of J Oakden (2-39) and P Horne, with impressive figures of 4-30 that had maximum impact on Singleton’s middle order, with L Dawtrey (0), G Stanford (14) M Davies (2) and J Davies (4) all being dismissed cheaply.

Ex –skipper M Rooke (14) made welcome 2016 season debut and, along with R Dawtrey (20), began a rearguard action and the run chase was kept alive. F Davies (13*) continued the effort after M Rooke was dismissed by P Challen (2-10), with an innings that included a fine 6 pulled over square leg. An expensive two overs from D Easton (0-25) also helped the score along. Brief support from D Price (4), who was unfortunate to play on and J Baker (0) bowled by J Miller (2-18) finally brought an end to Singleton’s innings, with a total of 202, only 25 runs short of the win.

Singleton is once again away from home next week, hosted by Kirdford CC.